“The Crazy Crazy Ones” Music Video! 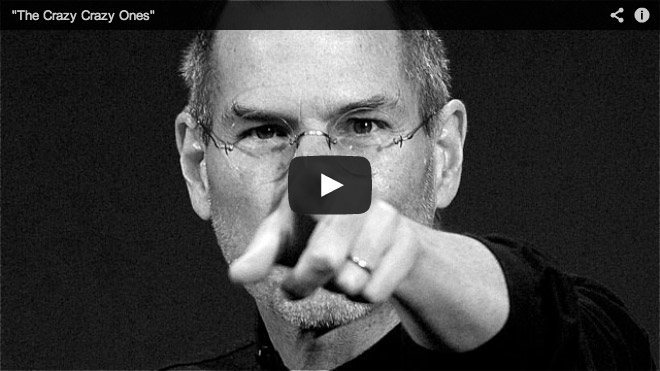 “The Crazy Crazy Ones” is a song written by Chris Chickering and Greg Barnhill. It’s a tribute to those who have pushed the human race forward. The music video above features 53 of the most inspiring people of all time.

Inspiration For The Song:
Chris was inspired to write and produce “The Crazy Crazy Ones” after watching the ultra-inspiring, Emmy-Award-winning television commercial: “Crazy Ones,” as part of Apple Inc.’s “Think Different” ad campaign. This commercial was created in 1998 by the Chiat/Day ad agency in response to Steve Jobs’s request for an ad campaign that reflected the life philosophy he promoted at Apple.

[tabs tab1=”Steve Jobs Quote 1″ tab2=”Steve Jobs Quote 2″ tab3=”Steve Jobs Quote 3″ count=”3″]
[tab_first] “Life can be much broader once you discover one simple fact, and that is – everything around you that you call life, was made up by people that were no smarter than you. And you can change it, you can influence it, you can build your own things that other people can use.”
***Interview for PBS, ‘One Last Thing’ documentary, 1994*** [/tab_first]
[tab] “The minute that you understand that you can poke life and actually something will, you know if you push in, something will pop out the other side, that you can change it, you can mold it. That’s maybe the most important thing. It’s to shake off this erroneous notion that life is there and you’re just gonna live in it, versus embrace it, change it, improve it, make your mark upon it.”
***Interview for PBS, ‘One Last Thing’ documentary, 1994*** [/tab]
[tab] “I think that’s very important and however you learn that, once you learn it, you’ll want to change life and make it better, cause it’s kind of messed up, in a lot of ways. Once you learn that, you’ll never be the same again.”
***Interview for PBS, ‘One Last Thing’ documentary, 1994*** [/tab]
[/tabs]