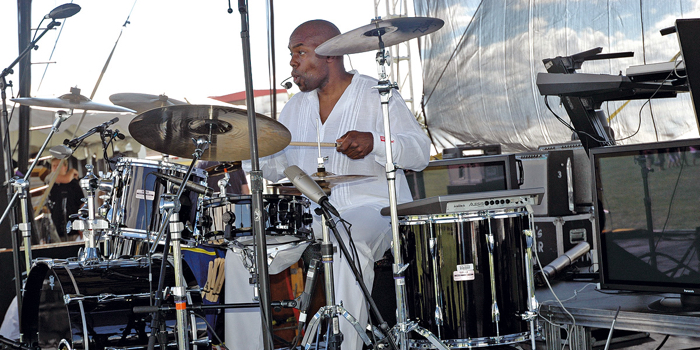 Drums & Bandleader (Summer, 2015)
Rock n’ Roll Hall of Fame inductee Public Enemy (2013) is widely acknowledged as not only the most important hip-hop act, but also one of the greatest bands of all time. However, their bassist and bandleader Brian Hardgroove does not rest on those accolades. Hardgroove has established himself as a writer, and producer well outside the realm of Public Enemy. Having learned the art of record production from two giants in the business Jack Douglas (John Lennon, Aerosmith, Cheap Trick, Alice Cooper) and Eddie Kramer (Jimi Hendrix, Led Zeppelin, Kiss), Hardgroove has garnered a wealth of knowledge that serves him tremendously in his production career.

Hardgroove’s production credits are diverse and include Fred Wesley, Supertramp, Fine Arts Militia Burning Spear, and Mark Anthony. Hardgroove has also moved into radio. As the host of his own talk/music program “Hardgroove’s Fuse Box” (KBAC-FM in Santa Fe), his star is continuing to rise faster and shine brighter.

“I’ve been blessed to travel much of this beautiful and complicated world. I know many artists that truly want their art to have a positive effect on humanity. Chris is one of the few that actually put in the work it takes to make that effect materialize. It’s my obligation to the universe to assist him in that work.”
– Brian Hardgroove