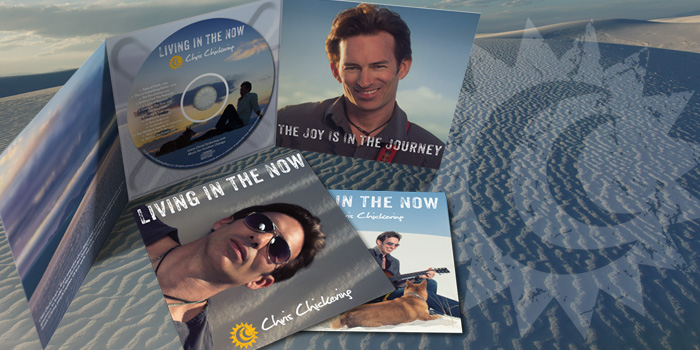 In the winter and spring of 2013, Chris co-wrote 37 songs with
Grammy nominated, Emmy award-winner Greg Barnhill for Chris’s 2nd
studio album: Living In The Now.

Living In The Now won “The Best Albums in Santa Fe 2013 – Popular
Choice Award” by Hutton Broadcasting and is ranked one of the top
20 albums of the year by Transitions Radio Magazine, one of the most
highly-rated, widely-listened-to specialty radio programs in New Mexico.

Living In The Now features 14 new and original songs that infuse
folk, rock and world music influences with empowering lyrics that
speak to timeless, universal truths about the human condition.

Chris Chickering leverages these truths with the power of positive music
to bring people together and lift their spirits.

Living in the Now is now available to order in a number of ways: as an MP3
download and while supplies last, limited-edition signed physical
CDs w/ a 16 page full color lyric booklet.

“Living In The Now offers listeners in music and songwriting what sages and mystics were carving in stone and have been writing about for eons; essential messages of awakening. Chris is tuned into what we need now, with universal lyrics of empowerment, backed by a studio band that is powerful and tight in all of the compositions.”
– Alan Hutner, Host and Co-producer of Transitions Radio Magazine

“Living in the Now has some of the best songwriting of our generation. Reminds me of the great American singer songwriters (Neil Young, Cat Stevens, etc..) with a modern twist. The lyrics dive into modern day topics around self actualization. Overall refreshing entertainment, enlighten and inspirational—a rare find!
– Amazon.com reviewer

“I had no problem finding lots of cuts to play off this terrific release. Chris has musical vision and has created a unique and unified album.” (Album: “Living in the Now” [Oct, 2013])
– Ira Gordon, Program Director, 98.1 Radio Free Santa Fe, NM

MORE ABOUT THE “LIVING IN THE NOW” PHYSICAL CD:
The physical Living in the Now CD is a silk screened 6-panel “Digipak” that features panoramic shots of Chris and his dog Chili at the White Sands National Monument in Las Cruses, New Mexico.

*** The Physical album is made using 100% post-consumer recycled cardboard.***