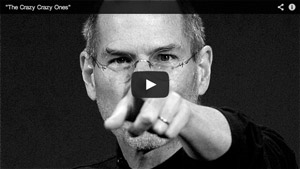 This summer I wrote and produced a new single called: The Crazy Crazy Ones. It’s a moving ballad/ tribute song to all those who have pushed the human race forward. I was inspired to write it after watching Apple Inc.’s moving commercial that came out in 1997. After hearing the produced track complete with symphony instruments, we realized a video HAD TO be made.

Click HERE to watch music video.
(Featuring 53 of the most impactful people of all time.)

The Crazy Crazy Ones is also a “movement” of people steeping into their greater story. Click HERE to read the Press Release.

To your greatness,
Chris